These wonderfull people made it all possible

How Jagruti Mahila Mandal was born?

Jagruti Mahila Mandal Mumbai was established on 22nd April, 2001 with the strength of 77 members, along with Shri Surati Modh Vanik Jagruti Mandal-Mumbai, under the inspirational leadership of Late Shri Ishwarbhai Dhabuwala. This mandal acts as a Ladies Wing of the main Shri Surati Modh Vanik Jagruti Mandal Mumbai. His aim was to unite our community members, living in far flung suburbs of Mumbai. Mahila Mandal’s aim was also similar, i.e. to get the ladies out of their homes, connect with other ladies of our community and come close to each other by celebrating community festivals, doing charity drives and camps.

The founder ladies at this time were Mrs. Daminiben Dhabuwala, Mrs. Varshaben Lapsiwala, Mrs. Kiranben Patel, Miss. Bhanuben Randeria and Miss. Chhayaben Dhabuwala. Late Shri Chandrakantbhai Lapsiwala also gave his guidance to these ladies. These ladies are truly to be credited for formation of the early Mahila Mandal. They personally travelled to far flung homes of our community members, got the ladies interested and got them registered in this Mandal as members.

The first registration fees were taken as follows:

In the beginning, all these ladies ran the Mandal together cooperatively.

The Modheshwari Mata Murti’s Pran Pratistha in Gorakshdham Nij Seva Ashram Temple was done on Mahasud Baras on 18/02/2008. The Pran Pratistha was done by Mrs. Kiranben Patel, our past Vice-President of Jagruti Mahila Mandal. Every year on Mahasud Teras, Mataji’s Patotsav is celebrated here. On this day, various Pooja & Havan is performed. Devotees can book their names for performing this havan. Nearly 150 – 200 people of Modh Community attend this celebration. Free sweets like – Mohanthal and other dry snacks are distributed as prasad. People wishing to arrange special Pooja or Mataji’s Havan are welcome here throughout the year.

In 2004, Mrs. Varshaben Lapsiwala was elected as the President of the Mandal, Mrs. Kiranben Patel was elected as the Vice-President. The meetings of the Mandal were held at various Mahila member’s home. Various demonstrations, calcium detection camp, gynac camp were held during their tenure. During this time a very active social worker from our community Mrs. Prabhavati Patel also joined in. She helped them actively in organizing various programs, activities, entertainment programs and made food arrangements for the meetings. Seeing the difficulties of organizing Mandal meetings in private homes of Mahila member’s, Mrs. Prabhavati Patel offered a venue for doing so on a regular basis.

By 2008, taking into account her selfless contribution to the Mandal, she was elected Joint Vice-President with Mrs. Kiranben Patel. Around this time Mrs. Mamta Randeria was elected as Treasurer. The membership stood at 90 registered members.

Various charity activities like donations of essential materials and cash to Mother Teresa Orphanage and cancer patients were done. Human Milk Donation Camp in Surat was conducted with the aid of 4 Mahila Mandals of Surat. Regular festival mahotsavs like Navratri Mahotsav, Winter Ponk Party, religious one day yatra to temples in the holy month of Shravan and Adhik are also undertaken. Picnics to manufacturing factories, resorts, tourist places are organized perfectly and executed successfully. Various demonstrations, which are informative and entertaining for the members are held along with the various parties. Speakers like Brahmakumari Sisters are also invited to motivate the ladies. Whenever possible, free gifts are given to Mahila Mandal members who attend the meetings.

All Mahila members try to donate money as per their capability, on all the occasions, whenever possible. Thus, ensuring future planning of Mahila Mandal activities.

Since 2014, gradually the 4 Surti Modh Vanik Mahila Mandals of Surat have grown very close to Jagruti Mahila Mandal of Mumbai and participate in each others programs and activities whenever possible. The growing closeness and interaction between these 5 Mahila Mandals should be credited to all the 5 Presidents of these Mandals. They are as follows:

Jagruti Mahila Mandal has succeeded to register 173 Mahila members for itself and hopes to increase its membership in future with the blessings of Mata Modheshwari and the love of its existing members.

Along with the help and cooperation of various Mahila Mandal members and the visionary leadership of Mrs. Prabhavati Patel, the Jagruti Mahila Mandal has transformed itself into a growing, inclusive and happy family, which is connected to all its members both emotionally and personally.

By launching our very own two new independent websites: http://www.suratimodhvanikmumbai.org – for Jagruti Mandal and  http://www.suratimodhvanikmahilamumbai.co.in/ – for Jagruti Mahila Mandal, we have tried to step into the progressive and digital era of communication with Mandal Members. This is just the beginning; we hope to take our organisation as far as we can with the help and support of our members.

Mrs. Rekha Modi, a member of Mahila Mandal Mumbai, with the blessings of Mahila Mandal President has successfully created a WhatsApp Group of Jagruti Mahila Mandal members. An effort has been made to include as many ladies as possible in this group on mobile. Thus, ensuring there is daily 24X7 interaction between Mahila members. Currently, there are two admins of JMM whatsapp group: Mrs. Rekha Modi and Mrs. Jagruti Asmani. As of now, there are 104 members active on this Whatsapp Group.

With Mataji’s Aashirwad, we have another feather in our SMV JAGRUTI Mahila Mandal Cap.
We have created a new YouTube channel for our JMM with the name – “SSMV – Jagruti Mahila Mandal Mumbai” in November, 2021.

Please click on the above link to watch all JMM events videos.
Also, click on the Subscribe button and the notification bell button, So that you can be notified about future JMM events Videos. 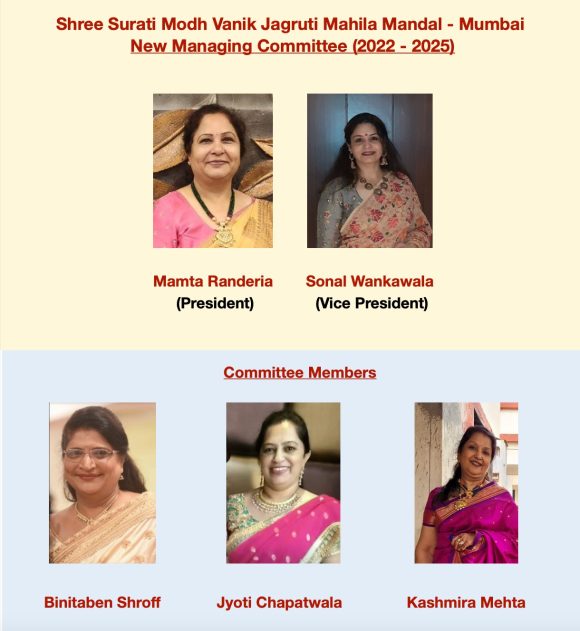 The current registration fees are:  Rs 2000 for lifetime membership.

For Address/Contact no updates and Blog contribution, you can feel free to contact Website Admin at the given number.